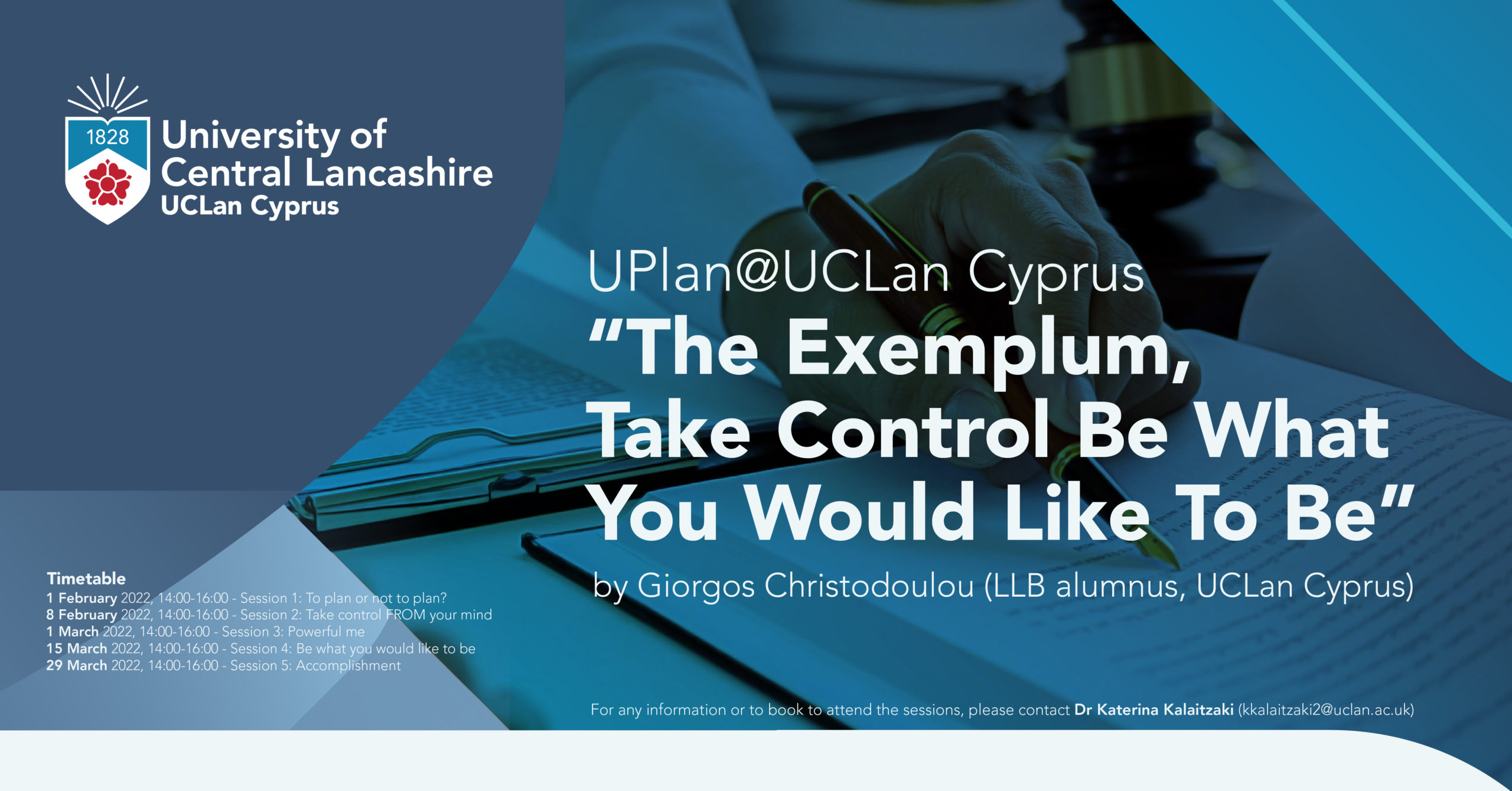 [email protected] Cyprus ‘The Exemplum, Take Control Be What You Would Like to Be’ by Despoina Theophanous

On the occasion of the Employability Month organised by the School of Law of UCLan Cyprus, a series of five interactive sessions is being offered to all undergraduate (LLB) and postgraduate students (LLM) of UCLan Cyprus. These five sessions are entitled ‘The Exemplum, Take Control Be What You Would Like to Be’ and are presented by Mr George Christodoulou who is an LLB alumnus of UCLan Cyprus. The session series started on February 1st 2022, while the subsequent sessions will take place on February 8th, March 1st, 15th and 29th of this year. The topics of discussion per each session are ‘To plan or not to plan’; ‘Take control from your mind’, ‘Powerful me’; ‘Be what you would like to be’; and ‘Accomplishment’, respectively.

The first session, which took place on February 1st was about personal plans. First, Mr Christodoulou asked the student attendees to name the most common question every child hears about their studies from an early age. Most students immediately responded with the most common answer, this being ‘what do you want to be when you grow up’. Mr Christodoulou concluded that from a young age people are expected to start thinking about their future career to plan steps to achieve their personal goals. He also stated that there is nothing selfish in planning your personal goals for your development, since caring for one’s future and helping oneself more than others to achieve it, is essential. Mr Christodoulou reiterated that the slightest detail can be the reason for your success and that students should not dismiss the importance of even the smallest acts, like designing their room and workspace, to set oneself up for success. He also confessed that he strongly believes in a rather beautiful metaphor, that every person has been delivered into this world in a box, that they then should come out of. The box represents comfort, security, and stability. Making it out of the box, however, often includes changes that most people fear. Therefore, people, and young students specifically, must first realize that there is a need to get out of their metaphorical box to realize their potential. In doing this, they need to think about where they are and where they want to be. Not only that, but people should also strive to make more detailed plans how to get there. Mr Christodoulou’s advice was that students should make note to collect all their resources and not be afraid to take risks to succeed in their plans. Thus, the most important step is to start planning goals and taking concrete actions, not only in theory, but in practice, which can sometimes be frightening, but it is imperative, since people must make mistakes, to learn from them.

According to the speaker, it is a matter of exercising our options. He pointed out that either you are wondering about your plans, or you know exactly where you would like to be and what you would like to be doing in your life and you make plans and concentrate all your resources to achieve this plan. On the other hand, people should not become planning freaks and be consumed by needing to adhere to their plans. Mr Christodoulou repeatedly reminded the attendees the importance of remembering that everyone is a human being, not robots. In addition, he referred to the different imaginary canvases that each person possesses where they will ‘draw’ and create their lives on. It is up to each person whether their canvas will be painted or whether they will be destroyed or remain unused. In everyday life, most people, instead of taking advantage of the canvas they have and painting an exciting picture on it, revert to not feeling like they are enough and complaining about everything and end up throwing away their canvases. While there are these lucky individuals who have already created their life plans, or those who are continuously planning and simply stick to knowing what their final destination should be, there are, unfortunately those, who have not taken any steps to plan their life yet, thus abandoning the canvas given to them.

Lastly, this first session wrapped up with the help of the ‘Poll Everywhere’ application, by which Mr Christodoulou displayed on everyone’s screen some photos of people from around the world. To name a few, some of them were Steve Jobs, Mother Teresa, Mahatma Gandhi, Adolf Hitler, Ben Carson and finally, Gwyneth Bebb. Each student voted on whether they believed each person illustrated was successful or not. There were many ‘yes’ and ‘no’ as answers for each figure, and there were times when students did not know the person displayed on the image. With this exercise, the speaker concluded that success is entirely subjective, meaning that, whether a person could or should be considered successful or not, is based on personal point of views, feelings, and experiences. However, Mr Christodoulou proceeded to add that accomplishment is not subjective; on the contrary, it is largely objective. As a result, the inspirational talk was concluded with the fact that planning is vital for those who want to achieve the maximum of goals that they set in their lives, and thus get where they want to be.