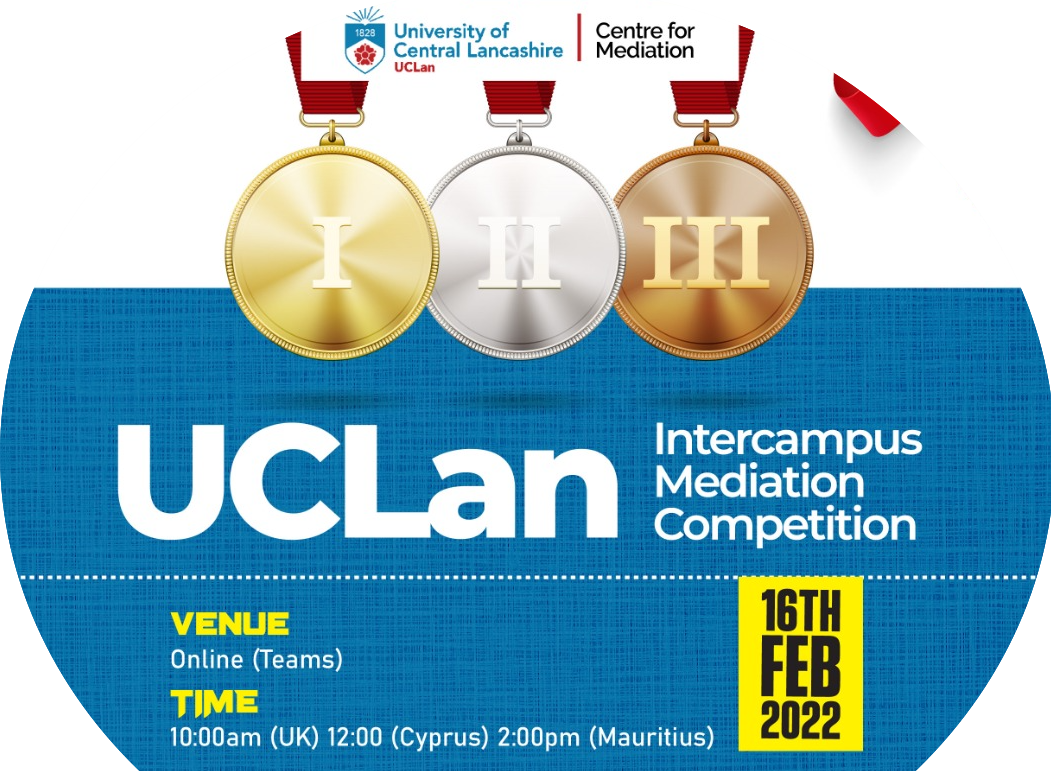 On the 16th of February 2022, UCLan Cyprus took part in the UCLan Inter-Campus Mediation Competition for the very first time, as part of the UCLan Cyprus Mediation Month 2022. The competition built on our university’s growing mediation expertise.  During the competition, LLM and LLB students represented each one of UCLan’s three campuses in the United Kingdom, Cyprus and Mauritius respectively. Students who acted as co-mediators were tasked with utilising their existing training as mediators to resolve a variety of dispute scenarios given to them. Other students participated in the competition as parties.

The Mediation Leaders from each campus, namely Dr Odibo, Dr Agapiou and Ms Gunglee organised this competition at the initiative of the Centre for Mediation in Preston, UCLan UK. Dr Odibo stated that mediation is a very useful legal tool to resolve disputes without the monetary expenses needed when taking your case to court, and its popularity has risen since the start of the COVID-19 pandemic. With the first pair of mediators, who were from the Mauritius campus, the audience saw how mediation can be also used in complex contract-related issues. The second co-mediation round was led by the Preston students, who were tasked with facilitating the resolution of a dispute which involved a complex and sensitive issue of a deceased individual. Despite not having been able to reach a solution due to time-related constraints, all agreed that the UK team performed excellently. And finally, the last team of co-mediators, Maria Konstantinou and Zafeiro Kastanou, came from our own campus here at UCLan Cyprus. They ended up achieving second place whereas Maria Konstantinou was named as one of the top three mediators of the competition. When revealing the results, Dr Odibo stated that it has been incredibly difficult for the judges to decide, as the level of quality and understanding of the training provided was clearly shown in all the pairs. In this respect, she emphasised that the Mediation Leaders were impressed with the performances.

Mediation has been defined by various cases and mediation experts in the last years as explained by Dr Odibo. She also highlighted that its effectiveness is undeniable and, in many cases, crucial. The fact that law students were able to resolve such difficult matters with beginner mediation training does not only prove how important an alternative to potential trials this method is, but it also opens a new possible career path for graduates of law schools who may find resolving legal conflicts outside of courtrooms more appealing than representing a party in a court of law. Lastly, if there is anything that was clear after watching this Inter-Campus Mediation Competition was that most attendees, both those taking and not taking part in the competition, were highly interested and willing to attend another event or even participate again.

‘Representing the School of Law in the Inter-Campus Mediation Competition and achieving the second-place award has been a great accomplishment for me, my co-mediator and the UCLan Cyprus Campus. It has been a remarkable experience that has assisted me to develop, as well as to expand my mediation skills. If I could say one thing with certainty, is that if I had the opportunity to participate in another mediation competition in the future, I would do so without a second thought.’ Maria Konstantinou, LLM Student, LLB Alumni

‘Acting as a party in the Inter-Campus Mediation Competition was one of the best decisions I have ever made. The experience was one of a kind. Not only did I have the chance to fully incarnate a very interesting role (that of the Director of a Hospital potentially responsible for the death of a patient), but also learned a lot on how the mediation process works in practice by watching my fellow participants act as parties and mediators.’ Anastasios Perdikos, LLB Student

‘The participation in the Inter-Campus Mediation Competition was a great opportunity for me and my co–mediator, Maria. We cooperated in order to achieve the best results for our campus and also for ourselves. Through this experience, I was able to expand and develop my personal, practical, communication skills. Moreover, it enhanced my professional development and promoted my social and legal background, which in turn contributed to my future career prospects. I look forward to employing the skills attained in my daily routine.’ Zafeiro Kastanou, LLM Student

We use cookies to ensure that we give you the best experience on our website. If you continue to use this site we will assume that you are happy with it.Ok