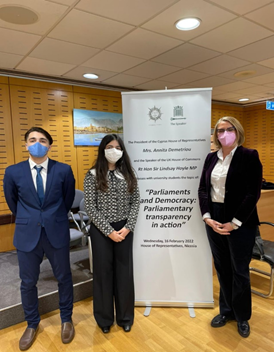 Τhe Speaker of the House of Commons of the United Kingdom, the Rt Hon Sir Lindsay Hoyle

Τhe President of the House of Representatives of the Republic of Cyprus, Her Excellency Mrs Annita Demetriou University Students from the Schools of Law / Social and Political Sciences of all Cyprus Universities

Parliamentary transparency is a crucial topic, which is discussed both officially within parliament and unofficially within social circles. On the 16th of February 2022, UCLan Cyprus law students, Joya Lahoud and Lambros Dinos, had the unique opportunity to participate in a parliamentary debate, organised on the occasion of a historical visit by the distinguished Speaker of the House of Commons of the UK, the Rt Hon Sir Lindsay Hoyle, to the Republic of Cyprus, upon the invitation of Her Excellency Mrs Annita Demetriou, President of the House of Representatives of the Republic of Cyprus.

Alongside 14 young students from across the Republic of Cyprus, UCLan Cyprus representatives joined the table in the House of Representatives to congratulate MR speaker on behalf of all the students of UCLAN Cyprus, on receiving a prestigious academic award from UCLAN on Friday 17 December 2021, as a way of honouring him for contributing significantly to the UK Parliament and politics throughout the years.

Additionally, UCLan representatives joined the debate to highlight the need for open, accountable, and transparent parliamentary practices, which are crucial in a representative democracy. It is strongly argued that parliament was created by the people and for the people. Consequently, the public expects leadership, openness, accountability, and transparency from its democratically elected representatives, particularly during these challenging, unprecedented times where global and national crises are at their highest peak. This could be exemplified by topics like climate change, the pandemic, the Cyprus problem, human rights violations, unemployment, and the lack of inclusion of women into society, politics, and education which are all issues of utmost importance for the citizens of the UK, Cyprus, the Commonwealth, the European Union as well as Middle Eastern region including Lebanon.

On this special day, everyone engaged in the debate and raised their concerns about the need to increase interest and involvement in the elections process and political participation among young people as a whole. In addition to this, students raised the issue of a need to ensure data protection, prioritize the development of sciences and technology nationally, and enhance the participation of women in politics. Moreover, it was suggested by our university’s students that we integrate technology within Parliament in Cyprus, with the focus being on online petitioning. The question posed to Sir Lindsay Hoyle was how the House of Commons deals with any potential backlash that may arise over not releasing any private government information that has been petitioned to be released. Sir Lindsay Hoyle’s response was both informative and precise, allowing for a better understanding of parliamentary privileged information and its importance.

It was evident that Her Excellency Madame President Mrs. Annita Demetriou alongside the Rt Hon Sir Lindsay Hoyle supported young people during the discussion and were very enthusiastic about the ideas suggested by the attendees, that are not only tomorrow’s generation, but also today’s generation.

As law students and future lawyers, Joya Lahoud and Lambros Dinos were delighted to attend the debate and share their comments on the topic. Through this blog, the students would like to thank Prof. Stéphanie Laulhé Shaelou for supporting them throughout the preparation and the discussion, and Dr. Klearchos A. Kyriakides for providing them with numerous interesting materials on the topic. Furthermore, through this blog the students would like to thank UCLan Cyprus, and the UCLan Cyprus School of Law, which in collaboration with the British High Commission delivered an informative and insightful webinar entitled ‘ Parliamentary Transparency and Accountability’ on the 25th of May 2021 https://www.uclancyprus.ac.cy/parliamentary-transparency-and-accountability/), for providing them with this unique opportunity to participate in a debate that will hopefully soon contribute notably to the advancement of the Cypriot policies and therefore, reinstate the public’s confidence in politics.